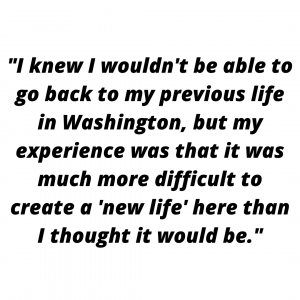 I expected things to be difficult after my release and return to DC. I had lost my steady, professional job after my conviction (and I had already been told I was not eligible to be rehired there, although my offense had nothing to do with my work there). I had given up my apartment and most of my furniture, and most of my remaining possessions were in storage. But unlike many returning citizens, I was very fortunate in having a strong network of friends in DC and elsewhere who were willing to help me ‘reenter,’ and two of them offered me a place in their home in which to live for a while, when I got back.

I expected that it would take a difficult year or so to find a new job and then a new place of my own in which to live, but I honestly thought that would happen after a year or so of being back in DC. I knew I wouldn’t be able to go back to my previous life in Washington, but my experience was that it was much more difficult to create a ‘new life’ here than I thought it would be.

What were some hard things that you were trying to accomplish after release (housing, employment, etc.) that were made harder by your status as a returning citizen?

I’ve searched and applied for hundreds of jobs without success, despite having an excellent education, work experience and references. My professional field (for which I have bachelor’s and master’s degrees, and two decades of positive work experience) has been entirely closed to me, and finding other forms of steady, full-time work has been extremely difficult. Since returning to DC in December 2010, I’ve had a string of temporary, part-time and contract jobs, amidst long stretches of unemployment. Those jobs have allowed me to stay solvent and continue functioning, but without any real security or benefits, must less prosperity.

Partly as a result of my conviction and criminal record, and partly due to my low income and unsteady job status, I also haven’t been able to find or afford a place of my own in which to live, and most of my remaining possessions are still in storage. I’ve lived for over a decade in two friends’ houses (as a renter) and in an addiction recovery group house, because those places were willing to accept me as a tenant with low income and unsteady work. 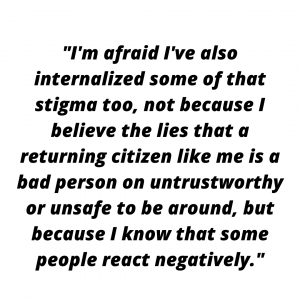 What’s a moment that sticks out to you where someone treated you differently because of your status?

There are several such moments, all of them painful and frustrating. Once I was hired for a very basic job by the owner of a small business, to whom I had disclosed my status as a returning citizen, but he ‘un-hired’ me after one day at work, because another employee there has looked me up online, discovered my criminal record, and refused to work with me. He acknowledged it was unfair to me, and I didn’t even have the chance to discuss my personal history or her concerns with her; the decision was made on the basis of her uninformed prejudice against someone in my position.

Another time I needed to find a new place to live because the recovery house where I had lived for over six years was being sold by the owner and closed. A week before we had to leave, I was offered a place in a group house where I knew one of the tenants and where I had, again, disclosed my status as a returning citizen. But before I signed the lease there, they changed their minds and withdrew their offer. Within a few hours I went from elation and relief at finding a new place to live, which I thought I would really like, to frustration and anxiety that it had fallen through, and that I had to find somewhere else within a few days.

How did you see your relationships change when people found out about your history?

Almost all the people I already knew – friends, colleagues, family and fellows in recovery, people who know me and my history – have been very supportive and compassionate and helpful to me before, during, and after my incarceration. That support, which many returning citizens do not have, has honestly made all the difference in my imperfect ability to stay housed and solvent, and to have some kind of personal life worth living, over the past 10+ years. 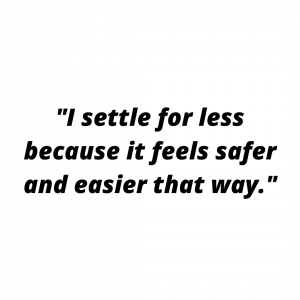 A few friends have kind of ‘vanished’ and remained out of touch or distant since I returned to DC, for whatever reasons — and that’s their right. On some occasions, when meeting new people, I think our relationships or friendships have become stronger and more meaningful when they’ve learned about my personal history and my struggles with the law, incarceration, probation and being a returning citizen. But some other people also clearly draw back or stay away.

I also think, honestly, that as a well-educated white man with a professional background, I probably benefit many times from people’s assumption that I couldn’t be a returning citizen and an addict in recovery — I can ‘pass’ as a ‘non-returning citizen’ in most causal encounters. But unquestionably, there is a stigma to that reality for me as well as for others, and for that reason I am often reluctant to disclose the truth with people I’ve met, which can in turn hinder the development of closer connections between us.

What is the experience like, living with the stress or anxiety of people finding out about your history?

Looking back, since late 2010, I think it’s been a sustained and fairly constant level of stress, punctuated by periods of acute stress and anxiety when I’m in urgent need of new work or a new place to live, and I know I have to go through the whole queasy and uncertain process of looking and applying and disclosing again — and I’ve already had a few really bad outcomes like the ones I mentioned.

I’m afraid I’ve also internalized some of that stigma too, not because I believe the lies that a returning citizen like me is a bad person or untrustworthy or unsafe to be around, but because I know that some people react negatively, so I pre-empt myself from striving for something better in a job or a new living situation or a new relationship, and I settle for less, because it feels safer and easier that way.

What do you think people think of when they think about someone who’s been to prison? What are you actually like? 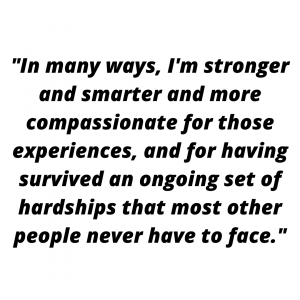 I think most people – like me before my experiences with the criminal injustice system – have very little knowledge or awareness of the reality of incarceration, of the millions of people who are incarcerated in our country, or of what it’s like to “reenter” and try to build a new life, after our previous lives have been shattered beyond repair. Perhaps aided by distortions they’ve seen in TV shows, movies and media, people may think a returning citizen is a hardened criminal who shouldn’t be “out” again, or who is highly likely to reoffend, even though statistics show that the vast majority of returning citizens do not reoffend, especially when they are able to find jobs and housing and supportive communities! People may also assume that returning citizens are inherently less honest, more troubled, more dangerous or less trustworthy than “average”, or non-returning, citizens.

I’m actually a pretty normal person, with a lot of the same strengths and flaws as other people. I made some bad mistakes 20 years ago, and I’ve paid a very heavy price for them since then, but I’ve also learned from those mistakes and spent 20 years changing myself and my life for the better. In many ways, I’m stronger and smarter and more compassionate for those experiences, and for having survived an ongoing set of hardships that most other people never have to face, or even think about. Rather than letting my personal pain and setbacks crush me, or make me bitter and hostile, I’ve gained valuable new perspectives on life, and found levels of strength and faith I didn’t know I had, which actually leave me with more to offer to others in many ways than before I went through all this. 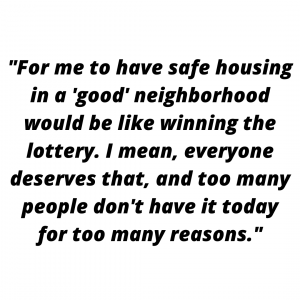 Perhaps people should consider how much less safe their neighborhoods might be if returning citizens can’t get stable housing? Do they really want thousands of returning citizens – who used to be their friends and neighbors and co-workers – living on the streets, or reduced to desperate measures to survive? Do they really want to live in communities that are only for people exactly like themselves – until someone like them ends up incarcerated, and then can’t return there?

Absolutely nothing that happened to me is unique to me, and everything that I’ve experienced can happen to any other person, quite literally. Believe me, I never in a million years thought I would end up breaking the law, being imprisoned, and then having to find a way to recreate a life as a returning citizen. My experiences have been beyond anything I could have imagined.

Maybe exactly because of how hard it is for a person to be convicted, incarcerated and then return to society years later, I think most returning citizens are especially motivated to succeed when we return, because we never want to go through that again! We may be the best neighbors, employees, colleagues and community members people have ever known, because of what we’ve learned and experienced, and hopefully because that’s changed us for the better. But I wish people would also realize that the nameless, faceless “returning citizen” that they don’t want to live or work with could easily be their family member or other loved one, or themselves some day — and how would they want that person to be treated by others?

For me to have safe housing in a “good” neighborhood would be like winning the lottery. I mean, everyone deserves that, and too many people don’t have it today for too many reasons. But I will never again take for granted that kind of good fortune, and if I find it again, I will certainly not be a neighbor anyone needs to worry about. My own record over the last 10+ years as a citizen who has returned to DC – without reoffending in any way, successfully serving and completing 10 years of onerous probation, finding work and housing and income to support myself and pay taxes, sometimes against the odds — proves that already. 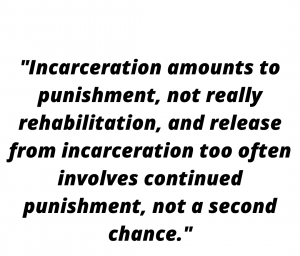 Any other questions you think I should ask?

Too many questions, and I wouldn’t have enough time to answer them all.

The last point I’d like to make, more generally, is that the vast majority of people who commit an offense of some kind don’t deserve a life sentence. And being a “returning citizen” with a criminal record, who’s labeled a “convicted felon” or an “ex-convict” or a “registered sex offender”, is in reality a sentence that never ends, because it has real and woeful impacts on those people every day, in almost every aspect of our lives.

I hope people can understand that the impact of a conviction goes well beyond the time served or the probation period imposed, even though our system and our society pretend otherwise. Incarceration amounts to punishment, not really rehabilitation, and release from incarceration too often involves continued punishment, not a second chance.